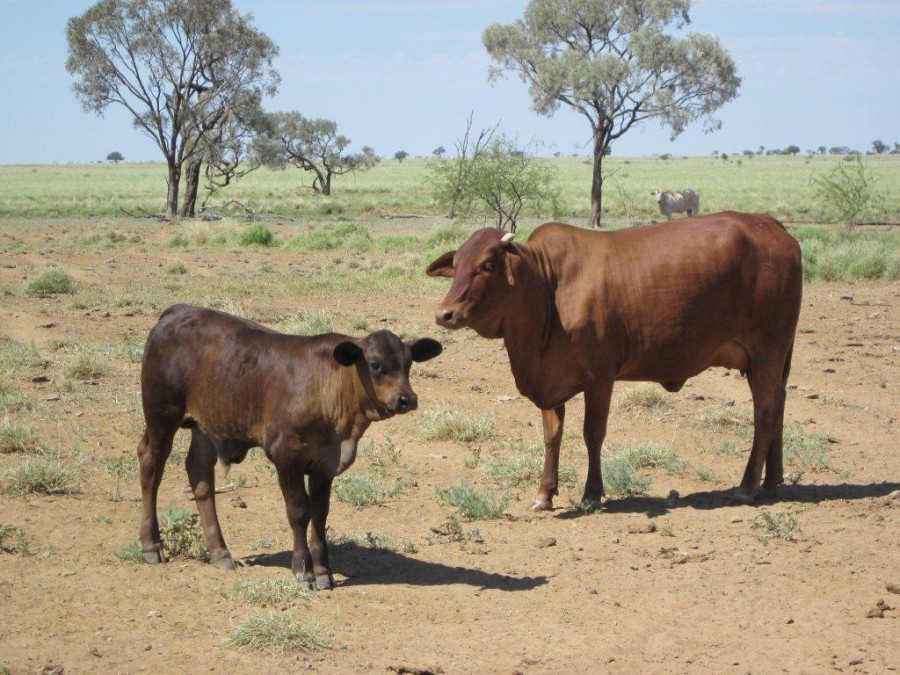 Alumy Creek bulls have been heading into the far north since 1992 via Rocky Allbreeds and Toowoomba Agshow. Cindy and Pam from Borree Station report Alumy Creek bulls have thrived in Longreach Qld. They selected another 2 bulls at the 2012 sale to join Alumy Creek B08 (commonly known as BOB due to the freeze brand on his rump). Cindy reported BOB sired 97 black calves from single sire joining 100 heifers this last season & sent a photo of a newborn calf born on a 45 C day & another of an 8 wk old ripper of a calf. BOB weaners were high sellers at the annual 2012 Blackall weaner sales and Boree is looking forward to another run of top Alumy Creek Angus black calves this year. Note- they were again a highlight draft with the heaviest steer weaners on offer.

Pam has been back in touch to say the Alumy Creek Bulls and their progeny have continued to thrive through the past drought season- Borree Station was lucky enough to grab a few of the storms through the Longreach region. Pam said that we wouldnt recognise the bulls they have grown on and held their condition so well. They have had lots of enquiry from other producers keen to also see the added market flexibility adding of Angus to their breeding program. Other Qld purchasers have also commented on the cracking line of calves their Alumy Creek Angus bulls have sired and how well the bulls have settled in.

Check them out - every bull online CLICK HERE...  read more

It's a wrap the 2021 print catalogue is up online

The 2021 bull sale catalogue is up online -  Check it out here -send a message if you would like to receive a hard copy mailed out to you. Check back by the end of the week for photos and videos of all lots online too....  read more